Highway hypnosis: by car in trance

Three-part article about highway hypnosis and going into a trance in the car.

The sea can hypnotize

The sea possesses a power of moods, which works as a will. The sea can hypnotize. Nature can do that in general. The great secret is the dependence of the human will on the “without will”. Henrik Ibsen writes this in his notes on his play “De Vrouw van de Zee” The Woman of the Sea. (Clara Stuyver p. 29)

In 1911 Ibsen receives acclaim from Willy Hellpach. He notes in his book Geopsyche that the rustling of the sea creates a slight hypnosis. Hellpach compares the sea to waterfalls and forest noise, which he all scissors among the hypnoids. Relaxation of body and mind is the result.
Hellpach points out that the colors green and blue dominate the landscape. These natural colours are soothing and create a serene mood. It’s not just the natural landscape that has this quality. The human-dominated landscape also has this influence. 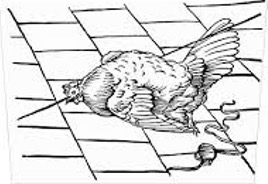 Athanasius Kircher describes in his ‘Ars magna lucis et umbrae’, a wonderful example of the imagination of chickens. He ties the legs of a chicken with a string and puts the animal on the ground. After some floundering and shouting, the beast lies still, “as if in its fruitless attempts, it despairs of flight, and surrenders to the arbitrariness of the victor.”

Then Kircher draws a straight line with chalk, for each chicken eye, and loosens the rope: the animal remains motionless, even after trying to hunt it down. Kircher concludes that the chicken imagines that the pinstripe is the rope, with which it is bound to the legs as before, and thus cannot stand up.
Professor J.N. Czermak (1826-1872) takes a particularly wild and shy chicken and lets her hold firmly despite fierce opposition and shouting by a servant. He then presses the neck and head on the tabletop with his left hand and pulls a straight pinstripe on the table with his other hand, from the end of the beak.

Released, the animal remains on the table for quite some time, panting but motionless, and lets itself turn on the back without waking up or trying to get out of this unnatural position. Czermak is surprised by this, but does not accept Kircher’s declaration of ‘the imagination’ of the chicken. He wipes out the pinstripe and the chicken stays down.

New tests without chalk and without strings yield the same result. Only holding and pressing neck and head in a straight line have the same effect: the animal remains motionless. The alleged ‘portrayal’ of chickens has been refuted. The same tests with ducks, geese, turkeys and once a shy, very wild swan, run the same way: the animals remain immobile for a while, no matter how difficult and forced their posture is.
With chickens that Czermak uses more often, it doesn’t always work. New wild chickens are the most suitable. In pigeons, all tests fail. That’s why Czermak abandons his first hypothesis. According to him, it is not true that holding and pressing down in a straight line of the neck and head cause some kind of tension or rupture in parts of the brain of the spinal cord followed by a temporary nerve slackening. If this guess was correct, it would also work with pigeons.
In the meantime, it appears that tying the legs and the pinstripes are unnecessary, but not without meaning. Through follow-up research, Czermak discovers that three things work together to obtain the result:

Often you can bring a chicken, which is ‘enchanted’ just beforehand, awake and flown away, in the same state of numbness in an instant. You only have to press her flat when she is standing on her legs and press the muscles with your hand on her back, gently and regularly. Usually she then, let loose, lie motionless for a few minutes, with a stretched neck, head raised and eyes opened.

Smaller birds, like ice creams, putters, canaries, you usually only have to lay and hold on their backs for a short time. Then they sleep and you can let them go. A frog is even more sensitive and does not last a moment on its back. If you force it to lie down and then tie a string around each front leg, then this slight pressure on the nerves of the skin is enough to make it numb. This example explains the influence, which is the binding of kircher’s chicken’s legs. The secret is not in the impossibility of walking away but in the pressure on the nerves of the legs, thinks Czermak.